Spent a very lazy Sunday enjoying the town, the people, and the culture, as well as just spending a lazy afternoon of napping and studying my verbs in Spanish. I wasn’t really thinking I would be doing this much research and studying on this trip. Good to get the ” ole” noodle back into gear after so many years of video games 🙂

The day started off with a bang. Literally!!!. They have these ” flash bang” fire works here. I can see no other way of describing them then akin them to what swat uses to stun people in a house. Bright burst of light with a horrendous bang. Normally they use these during the day. However, being Sunday I guess they wanted to wake everyone up in to for church they started going off about 6:30. Then every 20-30 minutes after that. Not so bad. I was still tired but rested so just laid in bed enjoying to cool air and thinking ” I have nothing to do, so am just going to lie here” . Which I did, for about two hours just sort of dozing in and out.

Javi’s family where gone by the time I set out for the day. No food on Sundays here. So I moseyed my way back to yesterdays coffee shop and had the exact same thing, omelette with ham and cheese and a huge cup of coffee.

Today was also soccer day. One of the local favorite teams was playing on TV. So huddled in with everyone else around the big screen TV. Though I really didn’t have any idea which team to cheer for. I soon found out when the wrong team scored …. Goooooooooooooooooaaaaaaaaaaaaaaaaallllllllllll !!!! I got all excited which illicited a few stars. Soon got the clue. It was the other team I should be cheering for.  After the first half I left. Laying in bed I was wondering just how much of the city I was missing.

Off I went to explore. Seems I pretty much covered most of the main streets. I said yesterday there was about 30-40 main streets. I was way off. Maybe ten main and 20 one ways that, and those would lead to countless back paths and narrow walk ways leading into all sort of places.

The city is also built on a side of a mountain. So some roads and paths are really steep. At times my leg muscles were burning.  I even found where my bike was parked. Though I have no idea how to find my way back from here.

The colors of the houses and just the styles was all new around every corner. A myriad of colors and design. What I found most interesting is how they were built

with some for thought but lots of design changes to make them functional but certainly not aesthetically pleasing or following any type of code. Pieces are patched in, floors added on top of floors which was not in the original design.  But it all works, and with little paint you can put some makeup on it and make them look all pretty.

I was trying to focus on capturing the life in the city. Taking photos of faces, especially children and older ladies. To me those two groups capture life the entirety of life. From the fresh young smooth, smiling faces full of joy and happiness to the old, sun dried, wrinkled faces that show the years of of toil to make a living in the older ladies. The children are much for receptive as well to having their photos taken. I one area I passed one young boy with his younger sisters and asked for a few photos. One of the girls was so shy. I then showed them the pictures and from there it turned into a photo shoot. It also pulled in the attention of other children who wanted their pictures taken to see them on my camera. A few adults where also quit amused at the idea and got in on the action.

The market was open today, to my surprise, so did some more shopping. All the taste, sights, sounds, smells and vibes was intense and titillated all my senses. So after almost 3 months on the road I figured with a full kitchen I was going to cook some dinner tonight. 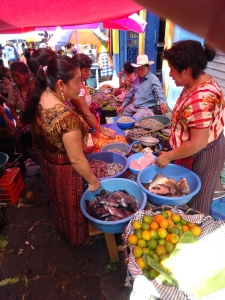 So stalked up on a lot o

f fruits. Veggies I didn’t bother with. The main course tonight is going to be fresh shrimp. I bought a pound of them for a few bucks. Who can say no to that. MMMMMMMmmmmm.

This town would be on my most popular list of places to come to feel safe in more than just a place with low crime ( except outside the city). It is a very old Mayan city.

Deeply routed in the Mayan culture which is one of trust, respect and watching out for your neighbor.  You feel that on the street. Even with a large language barrier people are so friendly from young to old. When walking down a non crowded street almost everyone, from young to old, gives you one form of salutation or another. ( I have come to realize there is a lot of slang terms for hello/ good day/afternoon. As well, the original Mayan language is still often heard.   This sense of security adds to my confidence level in learning Spanish and speaking it more openingly trying new things. There is just an open acceptance that you get even when I have no idea what to say. It shouldn’t come as a surprise that this city is a hub for people to come to learn Spanish. I’m looking to immerse myself into studies for the next week and see where it does or does not take me. 🙂

The weather here is oddly predictable. I can only recall one other place that offered weather patterns that are as predicatable and that was Recife Brazil, where each day between 3-4 p.m the skies would open up with torrential downpours then stop and you would have the same temp and sun/ moon until the next day. I’ve only been here three days, however, each day around 4 while the sun is still out the temps start to drop, almost putting a chill in the air. Then in the distance you can see very heavy rains coming down. Then just before sunset , at 4:50, the rain starts here. Then at some point during the night the skies open up once again. I imagine the high mountain ranges in this area with the large deep cold lake has a lot to do with these weather patterns. But I could be wrong. I have only been here three days.

Interesting thing about this area. It is really clean. There are signs all over about littering. Plastic is also something that is frowned on. Ever since day one my host , Javi, said I should buy a 5 gallon bottle of water instead of using smaller ones that ruin the environment. My local coffee place has a sign saying local codes do not allow them to use plastic straws. As well, unless you really need a bag you are not offered one. Which is why I now travel with my backpack as totting 10 things along with just two hands is pretty awkward. But it does keep things clean. Though this may be a new trend.

So that is pretty much it for today. Going to give WordPress another as you can see.

Select a Month to View Blog