In 2011 I had a fairly serious bike accident. However, I have always counted myself blessed

Picture that made it into the Newspapers. Yup that’s a cop car that hit me.

to still be here with all body parts still intact and functioning to one degree or another. Even though things can at times take me much longer to get done, they still eventually get done, however with more moans and groans as far as daily life goes, Though I have had to give up some of the more extreme sports and forms of entertainment I used to take for granted.

I spent the first 6 months laying  around in cast and constant pain and in need of lots of care. However, the worst part was not the physical pain or the busted up body. It was what was going on in my mind. I was in a pretty dark place. However, one major factor that saw me through that time was determination I had of  getting me and my bike back unto the road. About 10 months after the accident the bike was rebuilt and spring had sprung up here and in Canada and I was out on my bike. 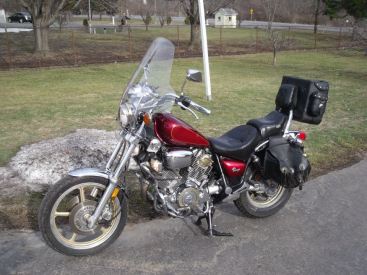 After being rebuilt and partially re chrome

happened come between me and my love of riding.

That was short lived though and only got me through the first season. I was having horrid flash backs when riding and I was always super vigilante, so much so that I was always worrying about the “what if’s”. It was robbing me of the joy of riding.

Over that winter I was losing any interest in riding. The following spring came along and I wasn’t keen on getting back on my bike but I did. By mid season I found I was forcing myself to go out for a ride. The joy had worn off. The open road had seemed to close in on me and I felt trapped in the accident scenario.

I still loved bikes so kept looking around. It was the summer of 2014 when I first got wind of the Adventure style bikes. I started reading, watching videos I think that is the first time I saw “Long Way Round” with Ewan McGregor and Charley Boorman . Needless to say I was falling back in love with the idea of riding for adventures, off roading, travelling the world on two wheels. I would no longer be stuck on tarmac. I could ride ” free” again. This idea wasn’t new to me, when I was 23 after having returned from backpacking the Americas, I bought myself a motorcycle and started equipping it to ride back to Brazil. That plan never worked itself out but the seed was planted.

I took the plunge and bought my V-Strom mid season. I had no plans on keeping this bike 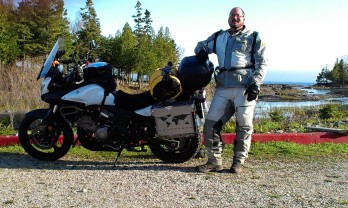 My V-Strom with upgrades to make it more ” adventure worthy”. Not to mention I become much more conscious of what I wore.

for resale value, every side road and path I saw was now new ground to be concurred. I was madly in love all over again finding adventure at every turn of the road or bush.  I also, met some of the coolest people in the ADV world. Adventure seekers I find have one main thing in common and that is a coolness factor for adventure that unless you are one you will never understand. 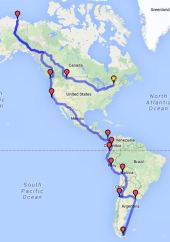 to Tierra Del Feugo. That is how this site was started. I found it amazing that people actually wanted to hear about my crazy endeavors.

At this point 3 years  had passed since my accident. I was still in and out of hospitals having multiple surgeries to repair my leg. However, Nov of 2014 I was to have my last surgery, so I thought.

The plans were to leave in June of 2015 and begin my year long trip through the Americas. During the planning process one thing kept coming up more than anything else. It kept 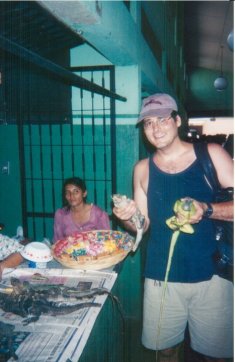 A younger me picking up dinner in Nicaragua.

me awake at nights, and haunted me during the day, as well. In spite of being an adrenaline junky and having traveled all over the world, and even having sold everything when I was 21, giving up my job, and throwing on a backpack for places unknown through Central and South America and see where the winds would lead me. I was nervous about it. I’m pushing 50 now. Certainly not old by any means. But I will be honest. There where a hell of a lot more ” what if” question going through my mind now than when I was in my 20’s. The thought of after that one year on the road coming home to nothing scared me. However, I pressed through that and the plans continued.

Then I got the news that I would require another surgery on my leg. It was like someone kicked me in the gut. At this point I was heavily invested into this trip, both emotionally and financially. I thought of postponing the surgery and having it done after. However, on the rational advice of others. I decided to postpone the trip. Not to mention the daily pain I was in may have hampered my ability to do a lot of things I would have wanted to do, like climb Monte Picchu

Things became even more complicated when my primary surgeon, (I have three of these pesky little buggers called orthopedic surgeons who have all been helping me over the years) said he did not wish to do the surgery thinking it may not help. However, my other surgeon was adamant it was needed to help alleviate the pain. Nothing moves quickly in the Canadian medical system. It may be free but it can be lengthy to get in to see a specialist in none emergency situations.Presently I am waiting for a consult with my third surgeon to seek his advice.

The adventures and desire for the adventure never stopped. I’ve had a lot, from long weekends away with the boys to day trips into unknown parts and trails. To a three week 8,500 trip that included the Trans Labrador Highway. You can hear more about that by reading back in my blog OR come and join me and dozens of other speakers this year at The Ontario Horizon’s Unlimited meet where we will all be sharing out stories of adventure.

So during this entire planning process one thing has always been bothering me. What about when I come back.   I’ve never stopped thinking about it.

This leads me to the point of this blog. For as long as I can remember I have always enjoyed smaller living spaces. I never needed much. I am a minimalist, and pride myself on trying to leave as small an environmental footprint on this planet as I can. I think this stems from all my travelling and having worked for and International Relief Agency.

It was about three years ago I sort of got hooked on the Tiny House style of living. These are houses that are small. Averaging about 150-200 square feet. Some incorporate some very interesting space saving features. A lot of them are built on trailers saving the people on taxes and forgoing building code regulations which can be a bureaucratic nightmare. However don’t mix  up a Tiny House with a recreation vehicles, mobile homes, or trailer campers. These are literally cute little house. Take a full grown home and shrink it.

This has always been something I thought I would love to do for a few reason. People pay up too 30-50 % of their income on housing, whether renting or mortgage. Plus extra for utilities. 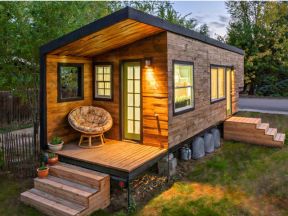 This is a sample of what the exterior of mine will look like.

It cost a lot to heat and cool even a small 1000 sq foot home. The savings involved in a small home are enormous. I would be looking, after it was all built, saving about $10,000 a year as it stands now on rent and utilities. That is a lot of money. Money I can use to invest into travelling.Also I’m a non committal type of guy. Having a home on wheels is like giving me the key to the world and I can move my home whenever I want. Finally they are low maintenance and are easy to just store as I travel. I also can do most of the work myself with the help of some seriously helpful friends.  If I haven’t called you yet!. Expect a call sometime soon. 🙂

All that said. I have taken the first steps to the build. I have secured a place to put my trailer and build it. On Friday I spent a eight hour day traveling up to Havelock Ontario to look at a couple of trailers. After  a lot of looking I made the first large purchase.

Of course I bought used. No need for brand new and spend $5,000 on something you can buy used for a fifth of that price. The trailer was larger than I wanted. It was 32 feet but my plans did not include something that large 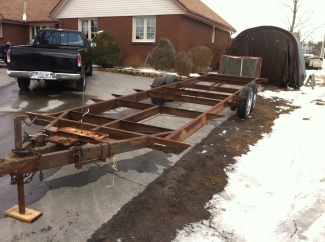 . First I thought I could chop part of the trailer off. However, a better idea came to mind and that on the back of the house I will build a dual purpose outdoor porch plus a place that in the winter can be transformed into a small garage to store and work on my motorcycle which will be a vital and intricate part of this house.

They trailer should me moved in the next few weeks to its new home in Prescott Ontario. My plans are to build this house with the capability of being totally off the grid. It will have solar and wind for electricity, it’s own  200 gallon water source that will collect, store, and filter rain water. All the appliances will run off propane. The final “blueprints” which I sure are going to go through a lot of changes during the process are in the work right now.

I expect it to be built over the next six months or so. So I am taking all my savings that were going to go to my trip across the Americas to build this house. It will be all paid for by cash, no dept, a place I can call home, and at the same time ” pack up” when I will leaving on and adventures. This will be a new adventure in my life. One that will keep the old passion of travelling the Americas MORE alive. It will offer the the flexibility of moving around, saving loads of cash to put towards more world travels and when I want to sit back and put my feet up, as we all do, I will have a place to call home

Hope you keep on coming back. BTW motorcycle adventures are in no way going to stop. Already have a few great ones lined up  for this summer.

Select a Month to View Blog